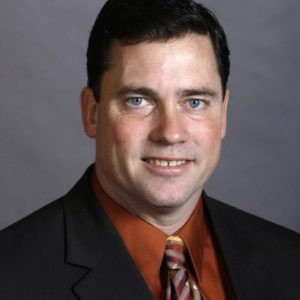 DECORAH – Twenty-eight people gathered for breakfast in T-Bock’s lower level on Tuesday, February 21st to learn from New Hampton’s Light Plant (NHMLP) from Manager Brian Quirk. The program is part of the monthly  Energy Breakfast series put on by the Winneshiek Energy District.  Quirk started by sharing  a snapshot of the Light Plant’s service territory and energy production and later took questions from breakfast attendees.

The plant’s yearly budget is just over $4 million and is not a part of the city’s budget, a measure that Quirk recommends to any city considering a utility. The NHMLP gets most of it’s power from Dairyland Power and Corn Belt Power Cooperative, whose natural gas and coal fired power plants provide a baseload necessary to serve customers at all times of day, according to Quirk.  The plant also owns a diesel generator that or 30-40 hours as supplemental energy and wider “grid support”.

The plant owns the transmission lines in and around New Hampton which, Quirk says, are incredibly low cost some years and take a lot of maintenance other years, such as last year (2016) with the flood. Disaster recovery is handled by NHMEU within a 24 hour period. Linemen work with cooperatively with local contractors to repair the damage.

The plant is currently exploring the feasibility of adding telecommunications component and is accepting requests for proposals to do a comprehensive feasibility study.

When asked if New Hampton’s low electric rates(averaging $.07/kwh) attracts economic development for the town, Quirk responded by sharing “We have well over 100 jobs in New Hampton right now and we cannot find people to work.”

The ratepayer-funded energy efficiency dollars collected by the municipality are put toward what Quirk describes as projects for the “public good”. This has included a conversion to LED street lighting and crosswalk lighting, in addition to energy efficiency education brochures.

Quirk has worked for the NHMLP  for four years and is one of seven employees at the plant.