I was a sophomore in high school for the first Earth Day. We had a whole day devoted to it with speakers, activities, etc. Our biology teacher (I nearly became a biology teacher because of him) was the spearhead. It changed me. Later my dad and I made a passive solar hot air collector from beer cans spray painted black. It worked pretty well! I designed an underground home when I was 19, but it was never built. After that, I was hooked on sustainability and knew there were better ways. The technology just needed to catch up.

Fast forward: I attended college for music education and taught 33 years as a band director.  I have renovated many homes, constantly pushing the edge of HVAC, building techniques, and energy usage. In 2008 I designed and built an ICF home with geothermal HVAC. Now with the addition of solar, it is nearly net-zero. I have enjoyed the process of designing and updating living spaces for modern, efficient living.

My mother and mother-in-law were our neighbors for 15 years, living independently in the two homes on both sides of us. It was great for them, our daughter, and us. It was a “grandma sandwich.” I began to worry about how I would care for the four women I held most dear if we suffered a power outage via weather, equipment, or whatever came our way. I nearly installed a natural gas generator on the side of our house to ensure I could always provide lights, warmth, and food prep. I decided not to do it because it was a huge unit, likely noisy and smelly, and expensive.

We have lived in our home since 1987. It is right on the banks of the Upper Iowa River in Decorah near Luther. We love our location and the house itself. But, unfortunately, it doesn’t lend itself well to solar due to its roof orientation and large trees. We had intended to eventually build a net-zero home on the lot that my mom’s house was on. But the latest FEMA flood maps showed that the property had been part of the river at one time and was in the floodplain. So we abandoned the idea of the house. 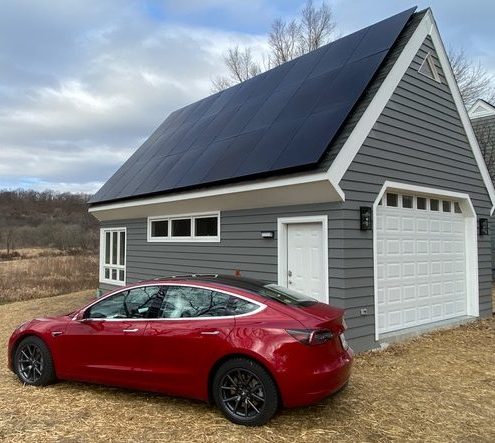 Instead, we built the Lil’ Barn on that lot: a 20′ x 30′ structure just 30′ from our home. It is currently a woodshed/workshop for me,  but has many future uses and all the amenities for a tiny home. It has a south-facing 13/12 pitched roof that is loaded with 27 – LG 360 solar panels for a 9.72 kWh array. The Endphase inverters are all terminated in the Lil’ Barn. From there, the 240v lines are sent to the Tesla BUG (the Back Up Gateway) in the basement of our home. The BUG splits the loads between our 2 Tesla Powerwall battery backup storage units and the service entrance to our entire home. The system automatically switches between sending our solar energy either directly to our home, to the Powerwall batteries, or to the grid…..sometimes splitting the load between two different destinations simultaneously. I don’t have to do a thing. It just works. The app allows me to watch, in real-time, how the array, batteries, our home, and the grid all interact. In the past week we have operated over 90% of the time self-powered. This is happening while it’s 90 degrees outside, our heat pump is keeping the house cool, our exercise pool is maintained and we charge our Tesla Model 3. This is the energy self-reliance that I had hoped to eventually realize when I was attending that first Earth Day.

The decision to build a solar array was the easy one. The more complex question was whether it was “worth it” to add battery storage. I never bought the natural gas generator, but the batteries now provide that same peace of mind. This was the reason we added the batteries. Price was not insignificant, but recent events such as the Derecheo in Cedar Rapids, the strange winter weather event in Texas, and the hacking of the Colonial Pipeline have caused me to think of my batteries as insurance, not an investment.

As we already own a Tesla Model 3 we wanted to “stay in the same universe” when we selected a battery to add to our system. Similar to the vertical integration of hardware and software that makes Apple products appealing, Tesla incorporates the same philosophy on its various products. So, Tesla Powerwalls were really the only equipment researched seriously, but I was convinced it was the best product for us. I haven’t been disappointed. 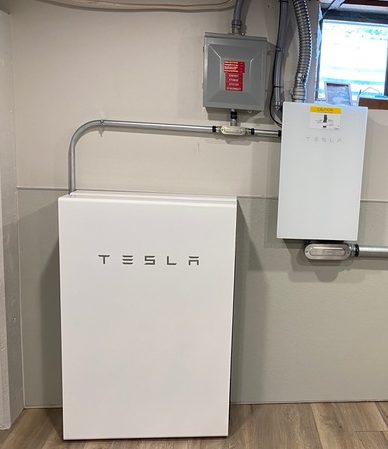 Our battery backup system includes 2 Tesla Powerwalls, which provide the whole house back up for us. Each Powerwall holds 7.5 kWh and can output up to 20 kW continuously.  A sunny day in June will completely fill both Powerwalls. We hold 20% of the battery in reserve back up and draw energy from the remainder when the array can’t keep up. It is hard for me to know the exact price we paid for the 2 Powerwalls as it was part of a “package” deal we made when we also purchased our solar array. The bill wasn’t itemized. But, we were after insurance/peace of mind, not an investment so ROI wasn’t important.

I look forward to winter as we also installed a new Lennox Heat Pump when we did all this solar work. It is a hyper-efficient air conditioner, but it also acts as a dual fuel heating system pairing with our natural gas furnace. It will heat with solar electricity down to 20 degrees, then the natural gas takes over. The battery backup system will assist in maximizing our own produced energy to heat and cool our home.

Looking forward, we’ve nearly done all we can do with weatherization, LED lighting, high-efficiency HVAC, solar, battery backup, etc. What I will be looking into next is a home energy monitoring system like a Sense Energy Monitor.

Our ultimate goals are self-sufficiency, working towards Net-Zero energy usage, peace of mind, and hopefully doing our part to provide a world worth living in for the next seven generations. The money required was definitely a consideration, but the bottom line was: “We’ve lived a life off cheap energy. It’s time to pay it forward.”