The Clean Energy Districts of Iowa (CEDI) has agreed to join a settlement agreement regarding a proposal by Black Hills Energy (BHE) to increase natural gas base rates. The agreement achieves the majority of objectives CEDI pursued in its testimony.

“We’re pleased with the settlement agreement” stated Jim Martin-Schramm, who developed the testimony for CEDI. “Some level of increase was inevitable, and any increase will be difficult this winter, on top of the recently added polar vortex fee, and rapidly rising market prices. But keeping the increase down to just over half of the original proposal, and eliminating what we believed were onerous riders and credit card fees, is a major improvement.”

The Iowa Office of the Consumer Advocate (OCA) negotiated the settlement agreement, and invited CEDI to join after reviewing direct testimony CEDI filed in the rate case docket (RPU-2021-0002) at the Iowa Utilities Board.

According to BHE’s “Map of Customer Count by County,” 55,905 BHE customers live in a county with a clean energy district. This figure represents 34.7% of BHE’s approximately 161,000 customers in Iowa.

CEDI’s testimony began by sharing information about the high and severe energy burden many experience in these counties and went on to explain how the proposed increase to base rates will exacerbate these burdens for many BHE customers.

According to the U.S. Department of Energy, energy burden is defined as the percentage of gross household income spent on non-transportation energy costs.  As Table 1 shows (end of article), all of the households in CEDI counties that qualify for assistance from the Low Income Home Energy Assistance Program (LIHEAP) have either a high (> 6%) or severe (> 10%) energy burden.

The proposed HEAT rider, CEDI argued, was especially onerous for many reasons. It  was unjust because it placed costs to retain and recruit new customers on existing customers rather than on shareholders. It appeared designed to undercut the existing state-regulated energy efficiency programs by providing incentives for equipment of lower efficiency. And it appeared explicitly designed to lock both new and existing customers into natural gas usage over long time-frames, just when we need to be moving away from fossil fuels on the basis of climate stewardship and to promote local self-reliance and prosperity.

CEDI also raised concerns about how the proposed rate increase would fall disproportionately on small commercial customers in comparison to larger commercial and industrial customers.  Finally, CEDI argued that BHE’s proposal to shift the costs of credit card user fees to all customers was unfair.

After reviewing testimony filed by CEDI, the Office of the Consumer Advocate, the Iowa Business Energy Coalition (IBEC), and the International Brotherhood of Electrical Workers, Local 204 (IBEW), Black Hills Energy agreed to the following terms in the settlement agreement the company filed with the Iowa Utilities Board on November 8, 2021:

If the Iowa Utilities Board accepts the proposed settlement agreement, this will close the docket and approve Black Hills’ rate increase proposal per the terms of the agreement. 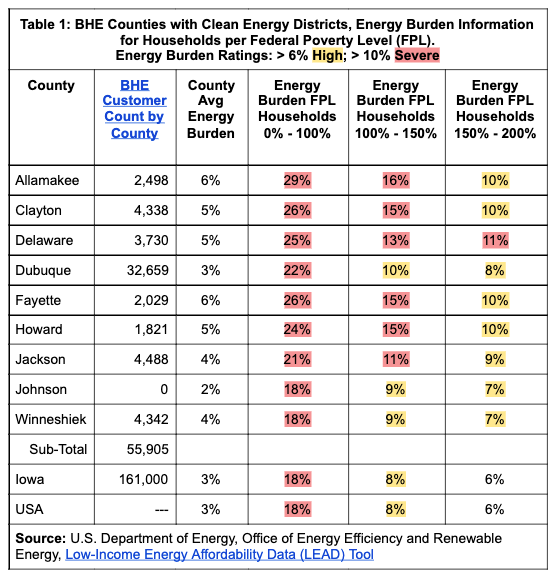