Solar PV can be a solid financial decision for your taxpayers, a critical kick-start to a local solar market, and an important leadership statement.  This page is meant to consolidate resources relevant to local governments in Iowa considering solar PV projects. Many of these resources are also relevant to other forms of renewable energy and to others interested in solar, especially other non-taxable entities. If your local government has installed renewable energy and is willing to be listed and contacted by others, please send us your information.

Establish a key point person within your entity, define a work team (facilities, financial, Board rep, etc), evaluate siting and ownership options, and use the solar contractor/developer base and your peer local governments as resources.

Johnson County has added four solar PV systems to their facilities since 2015: three ground-mount and one roof-top for a total of 330 KW: www.johnson-county.com/solar. In 2016, the County won 1000 Friends of Iowa Best Development Award for Innovative Leadership for their solar efforts, including adding a soil quality restoration project and low-mow grass to the Administration ground-mount project.  Contact: Planning, Development and Sustainability Department at greenteam@co.johnson.ia.us or 319-356-6083.

The City of Dubuque was the first to attempt a 3P-PPA with Eagle Point Solar, which was challenged by Alliant Energy, and resulted in the Iowa Supreme Court decision validating 3P-PPA use in Iowa: contact City Manager.

WACO School District may be the first in the state to be near 100% solar powered, thanks to multiple phases of construction and diverse ownership arrangements: contact Superintendent Darrell Smith.

Luther College (not a public entity but a non-taxable entity faced with similar challenges) installed a 280KW array in 2012 under a lease agreement, and is currently installing an additional roughly 800KW under a 3P-PPA agreement: contact Jim Martin-Schramm.

(Have a solar system? Send us your details and contact information.)

Local governments may own systems outright, or choose to take advantage of tax incentives via third party ownership (covered in the next section). This is not an exhaustive list, but covers the most important and broadly applicable incentives.

Third party power purchase agreements (3P-PPA) are mechanisms for 1) non-taxable entities to gain at least some of the benefits of tax incentives, and 2) any customer to purchase solar power directly from an on-site system without the up-front investment necessary to build and own the system. In 2014 the Iowa Supreme Court declared the PPA model a legal and viable option in Iowa.

The Interstate Renewable Energy Council has recently produced an excellent toolkit to help local governments with solar financing, focused on the PPA model.

The US Department of Energy National Renewable Energy Lab has produced a set of standard contracts for power purchase agreements.

Other public entities that have executed 3P-PPA agreements in Iowa will likely be some of the best resources, and the actual PPA agreements are likely to be public documents as well.

Note, many electrical firms are now also solar installers, and some are considering entering the “developer” space and offering 3P-PPA structures. It is a field in flux.

Are you a solar developer in Iowa offering 3P-PPA services to local governments and other entities? Contact us.

Utilities often claim that solar customers, by reducing energy purchases, are not paying their fair share of infrastructure costs and thus requiring cross-subsidization by non-solar customers. This claim fails to recognize that distributed solar also provides many benefits (or subsidies) to the utility and grid including contributing power during periods of peak demand, reducing transmission losses, avoiding utility investment in new generation, and frequency and voltage regulation. Determining this true “Value of Solar” (VOS) may represent a future alternative to net metering. A VOS is already in use in Minnesota, in Austin, TX, and under study across the country. A Feed-In-Tariff is another approach to placing specific value on solar (and other renewable energy) generation, and establishing certainty via long-term contracts. It is the most successful solar incentive globally, and is worth considering in Iowa. 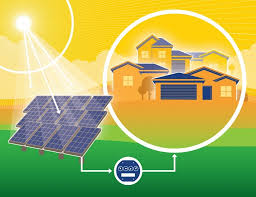 Community or Shared Solar is the fast growing segment of the solar industry. Considering fewer than half of utility customers have an adequate site for “behind-the-meter” solar PV, shared offsite arrays can allow everyone the opportunity to participate.

Sharedrenewables.org gives a snapshot of state-level policy, the Interstate Renewable Energy Council has developed model rules for shared renewables for states and regulatory bodies to follow, and our neighbors to the north have the most active program in the country. The time is right for shared renewable legislation in Iowa.

Northeast Iowa has the most solar arrays per capita in all of Iowa, and we're keeping track. Click the map below to view. 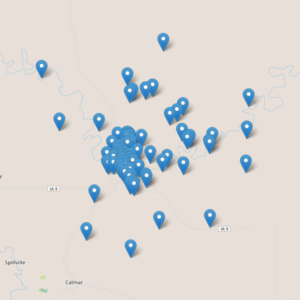 Do you have a solar array in northeast Iowa? Click below to add it to the map.