2021 may be an important year for electric vehicles. The first consumer electric pickup trucks are set to hit the market later this year. This is big news for Iowa, where trucks are the best-selling vehicle by far.  In this article, I have curated a list of electric trucks that are set to be released in 2021 or 2022, and what we know about them so far.

The EV transformation is happening faster in Winneshiek than a lot of other counties in Iowa. I spoke with Zach Albertson, a salesman at Decorah Chevrolet – Decorah Chrysler, about the coming transformation. He does not think that electric vehicles will really take off in Winneshiek until electric trucks hit the market, and to be widely adopted these trucks will need to have good ranges, quick charging times, and be practical for farms. If, after reading this article, you are interested in purchasing an electric truck, but are worried about maintenance costs, then you should know that the Decorah’s KAR auto group services electric vehicles! You can take an electric car in for maintenance right here in Decorah.

Of the list below, I am pretty confident that the first 6 trucks listed will actually make it to market in a form that is close to what I describe. I am less confident that the last two trucks will be able to pull off mass production so easily. If you want to make some quick comparisons then you can scroll to the bottom for a table with all of the truck specifications. 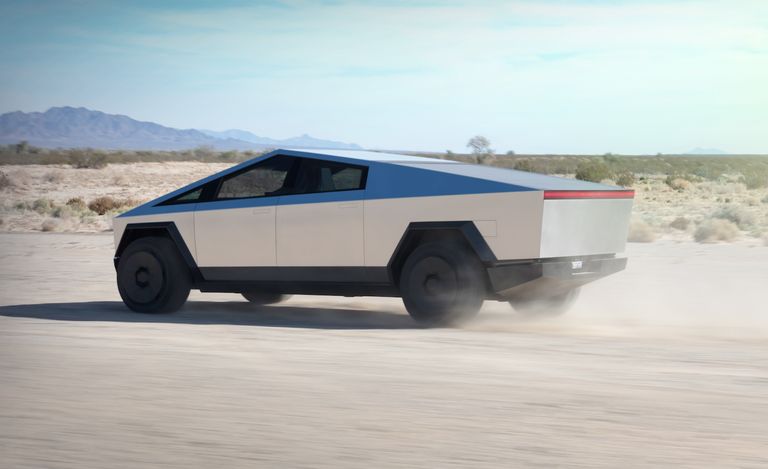 The Tesla Cybertruck is probably what comes to mind when someone says “electric truck.” Its aggressive design and marketing have made it quite memorable. Being a Tesla vehicle, one might expect it to be expensive, but it is actually the most affordable truck on this list with an MSRP ranging from $39,900 to $69,900 depending on the model. Also, depending on which model you choose the truck will have a range of 250+, 300+, or 500+ miles, all with DC supercharging available. The Cybertruck will be one of the first electric trucks to be available to the public, with shipments starting in late 2021. 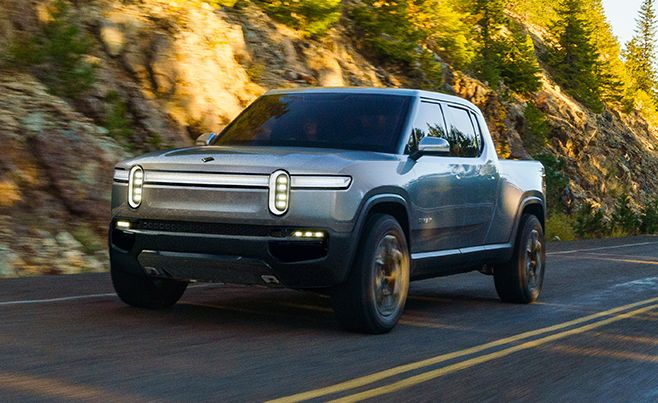 The Rivian R1T is sized between a mid-size and full-size truck and is marketed towards outdoor adventurers. Its smaller size leaves it with a bed length of only 4.5 ft, but it can hold its own against other trucks, being able to tow up to 11,000 pounds. Also, in order to make up for its smaller bed, there are various compartments throughout the truck, including the front trunk, resulting in a total storage capacity of 68 cubic feet (which means you could carry about 508 gallons of milk, if you were curious). The R1T is one of the more expensive electric trucks on this list, coming in between $67,500 and $75,000 depending on the model. Deliveries begin in June of 2021. All of the 2021 models will have a range of 300+ miles, and Rivian says that it will launch a 400+ and a less expensive 250+ mile truck in 2022. 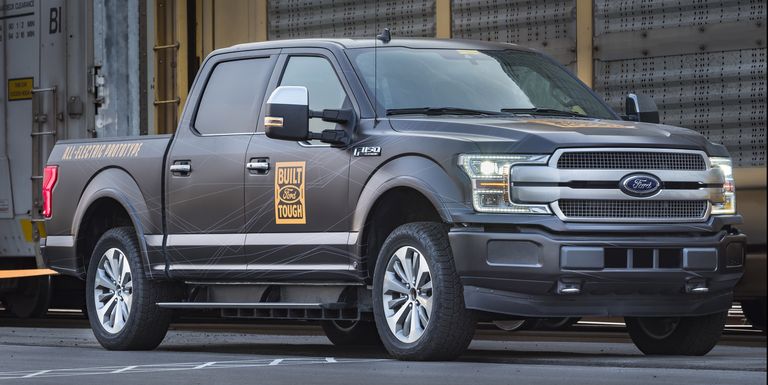 A lot of what happens in the electric truck market will depend on the launch on of Ford’s electric F150, which is confirmed to be in early 2022. Considering the popularity of the F150 in America, many people in the market for a new truck might just opt for a brand they know and trust. There is no question that Ford knows how to build trucks that people want, but do they know how to build a good EV? Time will tell. Not much is known about the specs of the truck so far, but most people in the electric truck space are expecting great things. 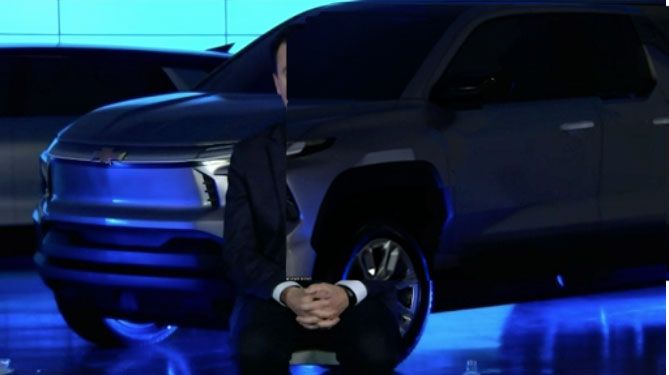 I know I said that I would only list trucks that will come out in 2021 or 2022, but since I talked about Ford, I feel obligated to mention Chevy. The (poor quality) picture above was taken at a GM event previewed an early model of what could be the Chevy EV truck. No other images of the truck seem to exist on the internet. I believe an EV Chevy could be out by 2025, maybe earlier. Chevy has not given any more details than that. 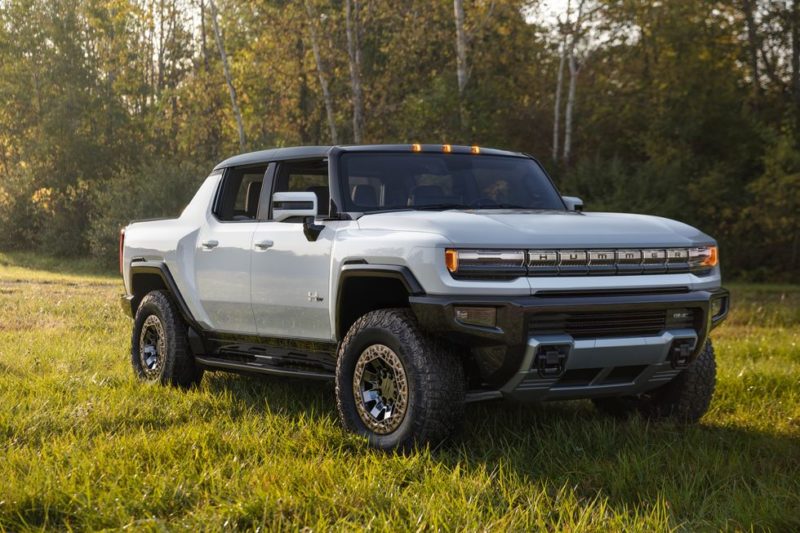 In a move that no one saw coming, GMC has brought back the Hummer as an EV pickup truck! Designed with off-roading in mind, it has features such as four-wheel steering, which allows the truck to move diagonally, and air suspension that can raise the truck by 6 inches, giving it 15.9 inches of ground clearance. Coming in between $79,665 and $112,595 (though the most expensive model is already sold out) I am personally not sure that I would take a vehicle this expensive off-road, but maybe if you can afford it, this truck seems like a really fun ride! Some other fun facts about the Hummer are that it will be built in Detroit, the tires can deflate on command, and it will feature GMC’s Multipro tailgate, so the 5 ft bed will be able to be extended by 2 feet. 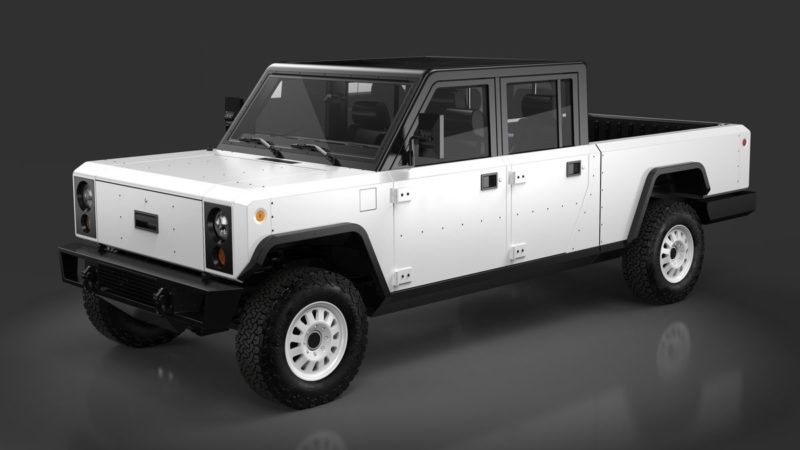 The Bollinger B2 is one of the most unique trucks on this list. Unlike many of the other electric trucks, it ditches the futurism for an extremely utilitarian look, but is it actually as capable as it looks? Despite being a class 3 work truck, it can only tow up to 7,500 pounds, though it can haul an impressive 5,000 pounds. It has the shortest range on this list, just 200 miles, and it oddly lacks airbags. Where this truck excels is in its ability to carry very long items. The center of the truck it empty so that it can carry items that are up to 16 feet long; if you are curious as to how this works you can look up “Bollinger Passthrough.” The rear wall also folds away to give the 5’9” bed 2 more feet of length. The B2 seems to fill a pretty niche market, so with its $125,000 price tag, I will be interested to see how it sells.

Here is where I begin to become less confident in these trucks’ specs and timelines. Both the Atlis XT and the Lordstown Endurance are being built by new startups with unproven track records, so it is hard to know if they will make good on their promises. 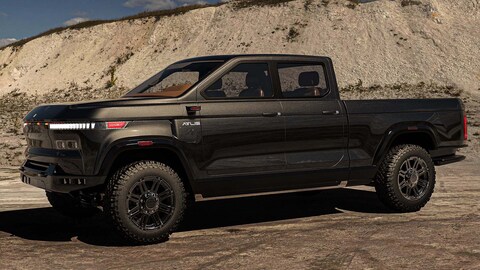 The Atlis XT promises a lot, but will Atlis be able to deliver on those promises? With a price of $45,000, a 500-mile range, 15-minute DC fast-charging, a towing capacity of 5,000 – 35,000 pounds, and a bed length of 6.5 to 8 feet, this truck certainly looks good on paper. However, as of now, they don’t even have a true prototype. The picture above is a computer render, yet they want to start shipping out trucks by late 2021 or early 2022. Seems like way too short of a time frame to go from no prototype to mass production. I am skeptical of Atlis’ claims, but I do hope they are able to bring this truck to market. 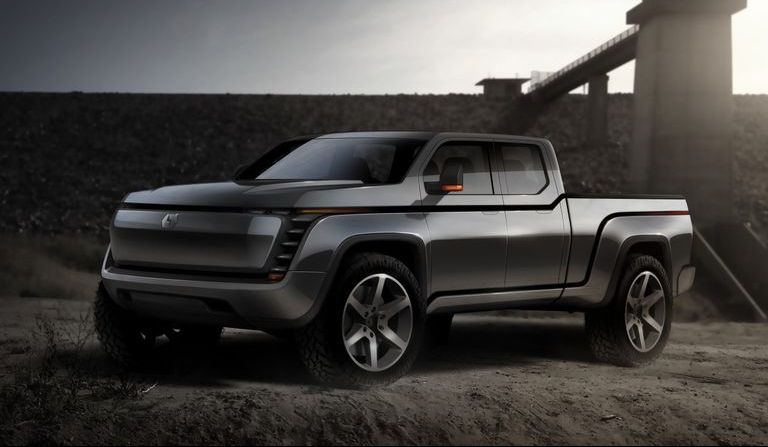 Electric truck startup, Lordstown, is trying to build a commercial fleet truck. They say that their Lordstown Endurance truck will begin shipping out in September of 2021, hoping to be one of the first electric pickups to market. With a price tag of $52,500 the Endurance will have 600 horsepower, a 6.5-foot bed, and will be able to tow up to 7,500 pounds. However, Lordstown has been recently involved in some controversy. In mid-March of 2021, Lordstown was accused of falsely inflating their customer reservations, and then later in March a prototype Endurance caught fire just 10 minutes into its first test drive. Lordstown insists that they will begin mass producing trucks in 2021 but I am personally not getting my hopes up. 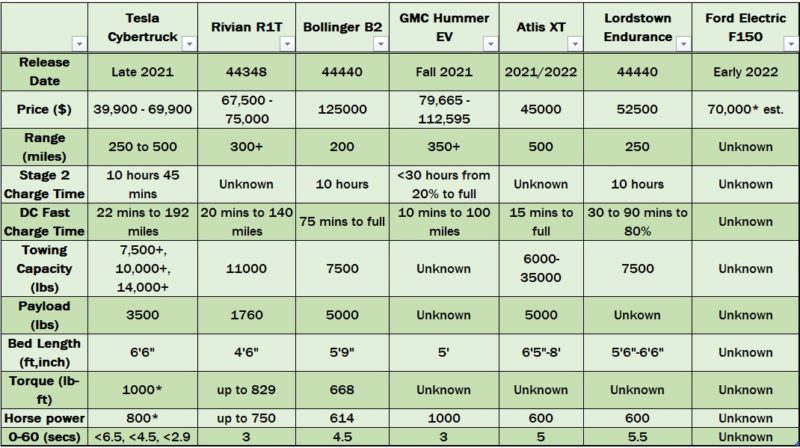