Energy Democracy notched an important success in Iowa this year, as the legislature agreed to fund the Iowa solar tax credit waitlist. (solar homeowners: the deadline to apply is June 30th)

The Clean Energy Districts of Iowa (CEDI) has been working on the waitlist issue for over a year, since it was clear the 2021 legislature was not about to extend the state’s solar tax credit (which is separate from the federal credit). The Iowa credit had an annual funding cap, and was significantly oversubscribed well prior to its expiration at the end of 2021. Without further funding, thousands of solar homeowners would have lost an average of over $3,000 each in promised tax credits.

Thanks to the advocacy efforts of so many of you, the leadership of Representative Bergan and Senator Klimesh and their colleagues, and the work of partners including the Iowa Solar Energy Trade Association, the funding was included at the very last minute in the revenue bill SF2367/H8382 (Division X, p28: text shown later in this article).

“This is a big win for solar, and many thanks to the Energy Districts for leading the charge”, said Decorah solar homeowner Jim Fritz. “We’ve already spent the credit!”

“The critical message now to homeowners who installed solar prior to the end of 2021”, says CEDI’s Andy Johnson, “is to be sure you’ve submitted your application for the tax credit to the Iowa Department of Revenue by June 30th. The credit isn’t an automatic: you need to apply and receive your award approval in order to claim it.”

As of this writing, the department’s web site is not yet updated to reflect the new legislation or application deadline, though the application appears to remain available on the site. Those who already applied and received a denial letter should be automatically reconsidered, according to the legislation, which is excerpted below (found in Division X, p28). 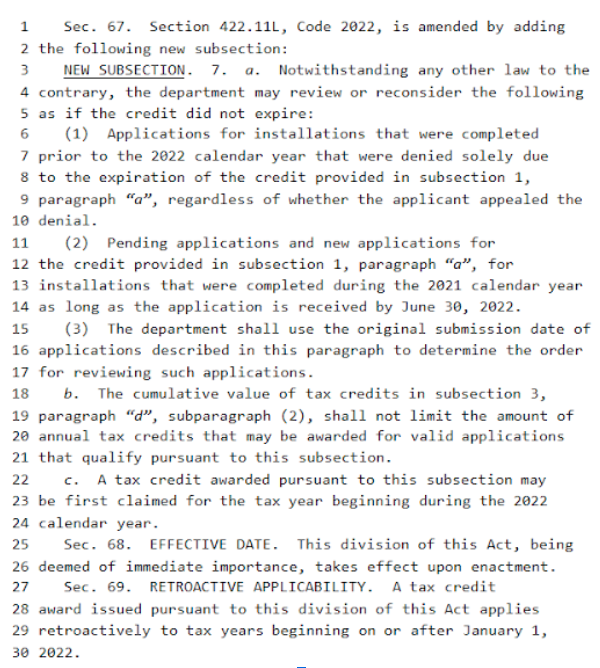