Ag Energy Report is an online calculator that shows the estimated total agricultural energy inputs across Iowa and by county. Crawford used data and assumptions form the most recent agricultural census (2012)  to create a sophisticated, user-friendly tool that aims to help users understand the big picture of agriculture energy inputs.

On the home page, the user chooses one or more counties for which to view agricultural energy data. Then, the user is presented with total energy consumed by agricultural operations for the selected areas (dollars and in pounds of CO2), calculated based on current costs of fuels and further detailed by crop/animal type.

The tool is live and can be explored at agreport.energydistrict.org.

“As a non-farmer, being able to look at a database that has that type of information and comparison is extremely beneficial from my end,” said Energy Breakfast attendee and Decorah Mayor Lorraine Borowski.

This project provides “big picture data” to legislators, farmers, energy planners and community leaders with just a few clicks. The project was made possible through NRCS’s Conservation Innovation grant, awarded to the Winneshiek Energy District to complete this project and others in the realm of agricultural energy.

“I was really proud of the Winneshiek Energy District and Brad for being able to pull that together,” said Borowski. “I’m not a computer person but to be able to look at it in that aspect I thought was extremely beneficial.”

After learning about the agreport tool, Todd Duncan from the local NRCS demonstrated differences in soil that uses preferred no-till and cover crop practices versus soil that was tilled intensely. The demonstration illustrated that healthy soil through low-energy practices reduces runoff, and creates a better growing environment for crops, in addition to saving farmers energy. 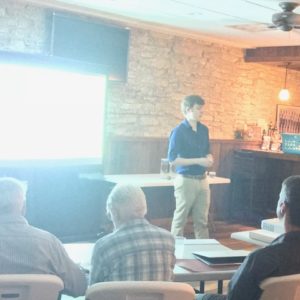 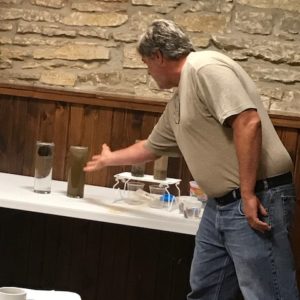 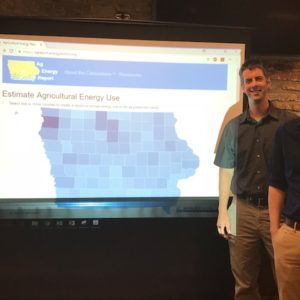