Black Hills Rate Case: What You Need to Know Now

On June 1, 2021 Black Hill Energy filed a rate increase request with the Iowa Utilities Board. Black Hills serves approximately 4,300 customers in Winneshiek County, including most of Decorah, Calmar, Ossian and Ridgeway.

Note that this proposed rate increase is permanent and separate from the 2021 Polar Vortex Fee that will be in place for 3 years. For more on that fee, see our story from last month.

In Iowa, natural gas is a semi-deregulated utility. The cost of natural gas itself is largely a pass-through fee based on actual market prices for gas. The infrastructure and operating costs, and profit margins, are regulated by the Iowa Utilities Board and adjusted through rate dockets like this one. Black Hills recovers these costs and earns profits based on two main components of customer bills: a fixed monthly service charge, and a volumetric charge called a “base rate” applied to every therm used by a customer. In the current docket, they are proposing increases to both components.

Black Hills’ proposal to raise rates includes both of these line items on your bill, the fixed monthly Customer Charge that is billed regardless of energy usage and the Base Rate that is billed per therm of gas used. The proposed base rate will increase from 11.6 cents per therm to 14.8 cents per therm, if the Iowa Utilities Board grants Black Hills their entire requested rate increase. This may seem like a large increase in percentage points, but it’s worth considering that (including the market cost of the natural gas) customers were paying 50 to 60 cents per therm prior to the 2021 Polar Vortex Fee, and are now paying close to 80 cents per therm. When those prices are considered, a 3 cent per therm increase isn’t so drastic. 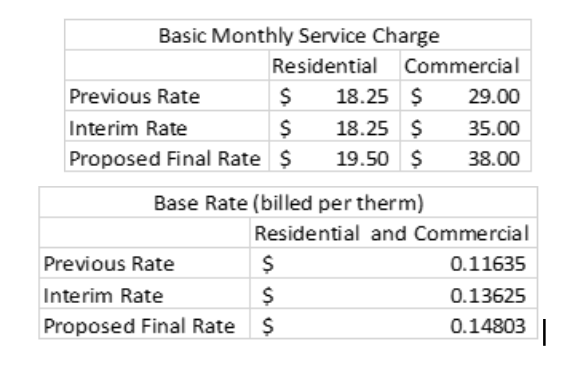 The increase proposed by Black Hills for the monthly service charge, and the base rate.

Of course, in addition to the slight increase in the cost per therm (“base rate”), customers will also see the fixed, per-month Customer Charge increase. This only goes up by $1.25 per month (or $15 per year) for residential customers. However, commercial and smaller industrial customers will see an increase from $29 to $38 per month, for an increase of $108 per year. This is an unreasonable cost increase for many small businesses, especially when placed in the “fixed charge” portion of the bill which negates the opportunity for customers to save through energy efficiency efforts.

Black Hills Energy last increased general rates in 2011 and they have completed substantial infrastructure work over the past decade that needs to be compensated. So while Winneshiek Energy District accepts the validity of a general rate increase, we do have concerns  with several proposed riders or special fees proposed by Black Hills Energy, as well as the monthly fixed charge increase for commercial customers mentioned above. These riders are extra fees that have the potential to nickel and dime customers, and can be raised or adjusted each year with minimal investigation or comment from the public.

Black Hills is also proposing an additional “Safety Fee”. For some reason this fee is proposed separately from the main rate increase. The problem is that the amount billed to customers can be adjusted each year, apparently with less oversight from regulators and no input from customers. Safety has been a fundamental consideration of utility rate regulation from the earliest days, and all such costs should be included in the standard cost of service studies and existing rate structure if deemed necessary. The Energy District does not agree to giving Black Hills the ability to unilaterally raise rates again in subsequent years without a rate increase hearing.

Last of all, Black Hills is proposing a rate-payer funded rebate program for gas appliances and new residential construction. It looks like this is, in part, replacement for the Energy Efficiency program that was recently severely reduced, but would operate without the same consumer protection rules and board oversight of the existing Energy Efficiency programs. Black Hills would like to use up to $2 million per year of customer dollars to create a fund to offset the upfront installation costs of new gas heating and appliances, especially within multi-family homes. This would lock in future gas customers for years to come.

There is significant irony in Black Hills proposing this rider not long after supporting the Iowa Legislature gutting Iowa’s existing rate-payer funded energy efficiency programs. Rather than being truly focused on energy efficiency, this rider appears to be an attempt at sales and profit protectionism.  It is also designed to prevent the adoption of highly efficient electrical HVAC systems and appliances, especially in new construction. This proposed fee is a considerable portion of the proposed rate increase that does not appear to be in the best interests of ratepayers

You can submit a comment to the Iowa Utilities Board using their Online Comment Form, or email customer@iub.iowa.gov. Be sure to include the docket number RPU-2021-0002 in your comment.

There are a number of public comment meetings held throughout Iowa in the coming months including one in Decorah at 5:30 p.m. on September 29, 2021 at the Hotel Winneshiek, 104 E. Water St.